How cute are these? I found a picture tutorial here, and decided to give these a go. They are a great way of using up scraps and the reels of cotton are rather old ones that were given to me when an old aunt had a clear out! 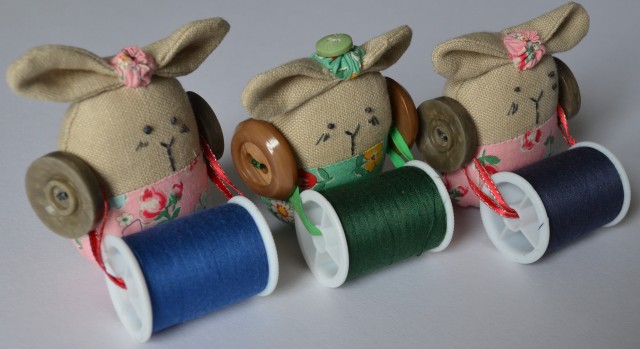 There were no real measurements given in the original pattern – so I had to wing it a bit. 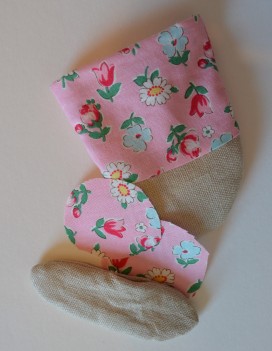 I cut out the pieces (shown above) and made a body out of the linen semi-circle and large flowered piece of material – rather like an egg cosy. Then I stitched around the outside of the two circles and gathered them in to make two Suffolk puffs. The larger puff was stitched to the bottom of the body and the smaller was sewn on top of the bunnies ears – which were made from the oval piece of linen. For a better set of photo instructions go to the link above. 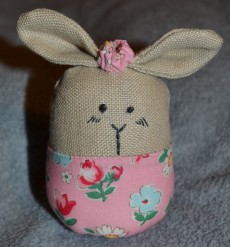 Buttons were then sewn onto either side of the little rabbit and a cotton reel secured onto the front by running a ribbon through the reel and tying it around the buttons.

Happy stitching to all!

My name is Deborah, and my earliest recollection of being creative is learning how to smock at primary school. We had a wonderful, white-haired lady who came in once a week to teach the 'girls' how to sew. I am not sure what the boys got up to during this time - but I never once felt as though I was missing out on anything. Now, as a primary teacher, I often give up evenings to teach enthusiastic children how to embroider. I am now just about to embarked into the world of blogging. Who knows if anyone will be interested, or if I can even keep it up. But here goes....
View all posts by wybrow1966 →
This entry was posted in Having a moment, Sew What and tagged handmade, Rabbit sewing notions, Rabbit thread holders, sewing. Bookmark the permalink.

My art work and other musings

Fabric, life, and all that

My Making Do Adventure
Petals and Pins

Embroidery with a difference

Heidi's Home Made Quilts and More

Making quilts and other neat stuff

Sharing my adventures in sewing and needlearts

all about fun and frustrations with everything fibery

Discovering the ‘Queen of the Midlands’

ONE QUILTING STITCH AT A TIME

Making life better, One Quilting Stitch at a Time

my little corner in blogland

Adventures with hens and friends

The Snail of Happiness

small steps to a kinder world

In search of the crafting life, in York, the most beautiful city in the world!